For my part I found so much to be stimulated by here.  I will focus on the chapter called “Find Each Other,” because it seems to me this chapter is where the authors lay out the heart of their political agenda.  They begin it this way:

Attach yourself to what you feel to be true.

This truth is something that one feels, rather than thinks or knows. It isn’t a view on the world, they say, but rather something that binds us to the world in an irreducible way.  It carries us forward into our lives; it distances us from some and brings us closer to others.  They say we must cling to this truth, implying that there will be forces that tear it away from us or tear us away from it.  For me it was extremely reminiscent of Vaclav Havel’s idea of how those with extraordinary courage in state-socialist Czechoslovakia were able to refuse the lies of the regime and “live within the truth.”  Anyone who can do this, the Invisible Committee says, who can hold fast to their truth, “will inevitably meet others like her.”  The project then is to hold fast to our truths, and look for others like us, others who share our truth. When we find each other, recognize our shared truth, and decide to move together on a common path, at that point a commune has come into being.  Then of course one can figure out how to organize the commune in order to become economically and politically autonomous. But it is this shared feeling of truth that is foundational, the thing without which the commune cannot survive.

Thus the Invisible Committee understands their politics in terms of communism, rather than anarchism, socialism, democracy, or justice. Of course they don’t necessarily reject those other forms, but they prefer to imagine what is to be done in terms of communes and communism.  Here of course they join a whole host of recent political theory, people like Nancy, Zizek, Hardt, Negri, Badiou, Dean, Ranciere, Toscano, etc., who have begun to use the idea again.  I think there is much to be gained by bringing this new work on communism into productive engagement with ideas of radical democracy and anarchism, because I think the ethics and politics are basically the same, and that most of the disagreements are due to terminological baggage rather than political difference.  I think that if we decide to look for it there is a whole wellspring of shared truth to discover among contemporary communists, anarchists, and radical democrats. 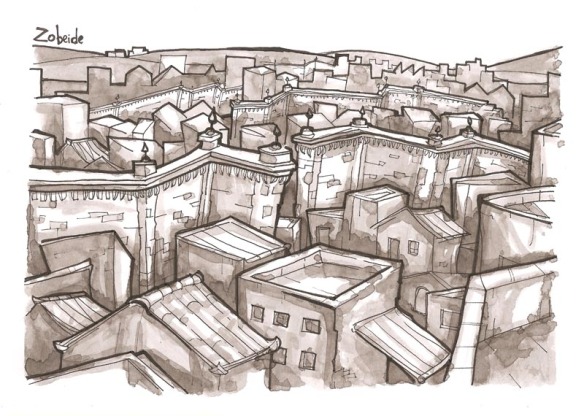 It is becoming almost a cliché with me, but I was again struck by the similarity between this idea of how communes form and a chapter in Calvino’s Invisible Cities:

From there, after six days and seven nights, you arrive at Zobeide, the White city, well exposed to the moon, with streets wound about themselves as in a skein.  They tell this tale of its foundation: men of various nations had an identical dream. They saw a woman running at night through an unknown city; she was seen from behind, with long hair, and she was naked. They dreamed of pursuing her. As they twisted and turned, each of them lost her. After the dream they set out in search of that city; they never found it, but they found one another; they decided to build the city like the one in the dream…

Of course it’s Calvino, and so the chapter goes on to introduce significant ambiguity, ambiguity that might offer a note of caution for the Invisible Committee’s vision of the commune:

In laying out the streets, each followed the course of his pursuit; at the spot where they had lost the fugitive’s trail, they arranged spaces and walls differently from the dream, so she would be unable to escape again.

This was the city of Zobeide, where they settled, waiting for that scene to be repeated one night. None of them, asleep or awake, ever saw the woman again. The city streets were streets where they went to work every day, with no link anymore to the dreamed chase. Which, for that matter, had long been forgotten.

New men arrived from other lands, having had a dream like theirs, and in the city of Zobeide, they recognized something of the streets of the dream, and they changed the positions of arcades and stairways to resemble more closely the path of the pursued woman and so, at the spot where she had vanished, there would remain no avenue of escape.

The first to arrive could not understand what drew these people to Zobeide, this ugly city, this trap.